"Before Abraham was, I AM"

There is a scene in the movie "Popeye" where the lead character makes this profound statement about himself: "I am what I am." In spite of this, there was no outcry from the Christian community, no condemnation of the movie or the character, no charges of blasphemy, no picketing of movie theatres, no boycotts.

If, as we in the Christian community have claimed for so long, all it takes to make the claim, "I am God," is the utterance of those two words, "I am," should not the use of those words by mere mortals have been banned centuries ago? Yet, to my knowledge, no move has been made in that direction at any time, anywhere. It's almost as if those words have no significance whatsoever except when uttered by Jesus Christ. That might be fine if he really had been speaking fact to Christians who believed in his deity. But he was not. He was in the midst of a heated exchange with Jews who did not even accept his claim to be the Messiah. We argue to this day that Why would these Jews, who had been trained by the Law of Moses to recognize only the Father in heaven as the one true God, and who had no idea that any Jew would dare to claim to be God, have recognized those two words, "I am," as a claim to Godhood when they were spoken by Jesus Christ, when we ourselves hear these words every day without so much as thinking of God in the slightest?  Go to an office or a job site. Ask, "Who's in charge here?" Invariably, someone will step forward and utter those blasphemous words, "I am." Yet no one is shocked. No one is offended. We recognize without thinking about it that this is not their intent. One has to go out of his way, saying something like, "I am the great I Am," before anyone sees anything amiss.

Was Jesus claiming to be God when he said, "I am?"

People who claim that this was the case argue that this was an obvious reference to Exodus 3:14, where God calls Himself "I Am." Exodus 3:13-14. 13 And Moses said unto God, Behold, [when] I come unto the children of Israel, and shall say unto them, The God of your fathers hath sent me unto you; and they shall say to me, What [is] his name? what shall I say unto them? 14 And God said unto Moses, I AM THAT I AM: and he said, Thus shalt thou say unto the children of Israel, I AM hath sent me unto you.

There are several problems with this argument. First, the words, "I AM THAT I AM," are not an accurate translation of the Hebrew words used. There is no Hebrew word for "I am." There is, however, a word for "become," and it is this word that is used here. The New International Version preserves the popular rendering, "I am who I am," but in a note gives a more accurate translation: "I will be what I will be."

It is currently popular to use John 8:24 and 8:28 as examples of Jesus calling himself God. If they are, they were not obvious as such to the translaters of the King James Version of the Bible, for they added the word "he" to complete the sense. Why did they not translate John 8:58 the same way they translated these other three passages?  John 9:9 is particularly interesting, because here the man born blind who was healed by Jesus used those words, "I am." Was he claiming to be God? Clearly the people he was talking to did not think so. No one accused him of blasphemy; they continued the conversation as if nothing had happened. In Jesus' case, they took up stones to throw at him. Yet no one on the scene, including those who hated him, accused him of claiming to be God. 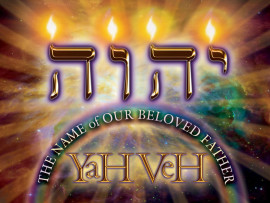 But there is an even more serious problem with this argument, and to see this one we must go back to Exodus 3.

Usually we stop reading at verse 14, and assume that "I AM THAT I AM," or "I AM" is the name that God is revealing to Moses. But God's name is not revealed until verse 15.Where is it? The translation in the King James Version obscures it. The word "LORD" which appears in all capital letters is one of the instances where the text was deliberately changed in the Hebrew from YHWH, transliterated "Yahweh" in English, to "Adonai," meaning "Lord." The change was marked by those who did it, and was done out of reverence for the name of God, not out of a desire to deceive. Nevertheless, it does obscure the meaning of the verse.

Once this word is changed back to its original form, the verse becomes much clearer:

Here, God's name is clearly and explicitly revealed as Yahweh, or YHWH. He is referred to by this name numerous times in scripture. In short, this is TREATED as His name throughout scripture.  In contrast, never again is God referred to as "I AM," or "I AM THAT I AM." Our identification of this as a name for God depends strictly on our interpretation of Exodus 3:14. It is confirmed no other place in scripture.

Clearly the name that God revealed to Moses for Himself is YHWH, or Yahweh. What, then, is the significance of "I am that I am," or "I AM?"God used these phrases to introduce His name, and they need to be viewed in that context. The words translated "I am that I am" are EHYEH EHEYEH in the Hebrew. "I AM" is EHYEH in the Hebrew. "Yahweh," the name given for Himself by God to Moses on this occasion, is made up of two parts: JAH, which is used elsewhere in scripture by itself as God's name, and EHYEH, "I will be." From this it appears that Exodus 3:14, and the phrases, "I am that I am" and "I AM," are an explanation of the name "Yahweh" given in verse 15.

From what we've seen so far, it should be pretty clear that the one thing Jesus Christ was NOT doing in John 8:58, when he said, "Before Abraham was, I am," was identifying himself as God. None of the disciples bowed down and worshipped him as God upon hearing those words; in fact, there is no indication that their very familiar relationship with him changed one bit after this utterance. This is utterly impossible if they, let alone the Jews who did NOT believe him, understood and believed him to be identifying himself as God Almighty. But the significance of what we've looked at here goes even further than this. Today it is common for Christians to allege, "Jesus Christ claimed to be God; he either lied or he told the truth." But when you ask for scriptural references to support this statement, no clear examples of this are to be found. In many cases, the only passages of scripture used in support of this statement are John 8:58 and, occasionally, the other "I am" verses, John 8:24 and 28. Without these verses, which were always weak and shaky evidence at best, we are left with no instances during his ministry on earth where Jesus claimed to be God. In light of this, perhaps we should reconsider our own ideas and teachings about this, to make sure that they are in agreement with God's Word.