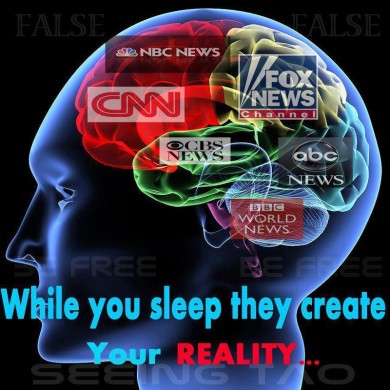 The whole world will worship the Beast, and the Dragon, who gave the Beast his power.

We believe that the modern idolatry of watching worldly television shows and movies is the most prevalent form of loving the present evil world instead of God, that is destroying the church from within. The TV set itself is innate, a potential tool, and not evil in itself. I am sadly very familiar with the phenomenon of what the church is actually watching on TV now days. I am ashamed to be very aware of what is actually on TV and almost every movie now days, and in the commercials as well, and of the common claims of those who are becoming apostate, that they only watch what is good, and don't watch too much, and that they don't let themselves be affected adversely. Our stance is based upon the actual reality of what those who call themselves by the Lord's name are and have been doing. They ignore and usually hide their lusting, their laughing at wickedness, their actual worship of the Beast and Satan as they become fixated on his lies, fiction, and antiChrist propaganda and 'entertainment', with the self confidence that their sin promotes. They don't want to notice their deception and delusion and sin, as it permeates every area of their daily lives.

This very common evil is the modern day equivalent and in fact tha actual spiritual evolution of the fruit of the tree of the knowledge of good and evil, the original sin that ruined the human race. It is very similar, in spirit, to the phenomenon of the people of Israel trying to worship God and Baal at the same time. This indulgence of the flesh is comprised of loving all that is not of God the Father, but is instead only of this temporary God hating Christ crucifying world: the lust of the flesh, the lust of the eyes, and the boastful pride of life. Only those who do God's will in this evil, adulterous generation will live forever. It comprises the love and worship of money, pleasure and all the idols of Satan's panoply of false gods and evil desires.

Jesus Himself was powerfully tempted in the same way when the Devil displayed to Him all the kingdoms of the world, and all the pleasure and glory associated with them, and offered it to Jesus if He would worship him instead of God. Jesus refused and sent Satan away, He did not continue to watch!! Eve continued to watch and ended up in death. She reasoned that the fruit was enjoyable to watch and valuable for making her wise and knowledgeable, and seemed to only enhance her power and independence as being, "like God". She lost her holiness, her righteousness and her relationship with God while she lost her soul. You cannot sit there watching it regularly without losing yours either. A true son of God will not entertain himself with any evil, not even in the name of learning the news, knowledge or wisdom.

I wrote most of the following poem, Satan's plan, (which I gleaned the original concept and skeleton from the author of the out of print book, "God Reveals the Identity of the Beast")

"The Devil once said to his demons below,
our work is progressing entirely too slow.
Those holiness people now stand in our way,
since they don't believe in the show or the play.

They obey the Lord Jesus and repented from sin,
proclaiming God's son to be Lord they will win.
Saying, "Drunkenness, smoking, these things are all wrong";
these Christians don't follow the ungodly throng.

They say that they owe their whole lives to the Lord,
they seek so to please Him in deed and in word.
They're quick to condemn everything that we do,
to cause unbelievers to be quite a few.

They claim many nice sins are all of the devil;
that true Christians live on a much higher level.
Now fellows, their teaching, while perfectly true,
is blocking the work we are trying to do.

We'll have to get busy and figure a plan,
that will change these high standards as fast as we can.
Now I have a vision of just what to do;

My plan of deception I'll now tell to you.

We'll find us a wise but degenerate man,
whose skill I can use to help work out this plan.
There's nothing so real as the things you can see,
the eyes and the heart and the mind all agree.

I'll give them the ultimate idol to view!
I say it will work, and convince quite a few!
Yes through it I'll teach them my self seeking way,
and make them forget to believe means obey.

The home is the place for this subtle device;
the people, deceived, will soon think it quite nice.
The whole world will want one, we'll cast such a spell,
that Christians wont know it was thought up in hell.

We'll sell them with pictures of the latest news,
and while they're still looking we'll advertise booze.
Yes we'll give them some gospel that isn't too strong,
and a few nature shows just to string them along.

I'll fill it up half with the knowledge of good,
so the other half's fruit will be misunderstood.
Then I'll cause them to wonder if God's Word is true,
making them feel like gods as scenes zoom into view.

They'll take in the ads with the latest of fashions;
soon watching the parts that will stir evil passions.
At first it will shock them, but while they still gaze;
I'll harden their hearts while they sit in a daze.

Murder and sex scenes they will soon behold,
until their soft conscience and love become cold.
We'll keep the real Jesus and His truth out of sight,
Never showing a lifestyle that's holy and right.

The old family altar that once held such charm,
will soon lose it's place without any alarm.
Their praying in secret will also be lost,
as they stare at our death screen, not counting the cost.

Compromise preachers who don't take their stand,
will embrace our new vision while building on sand.
They'll help fool the people and lead them to sin,
saying only,"Be careful" while soaking it in.

"Only news, documentaries, weather and sports;
We watch only good" will become their retorts.
And so thru the good shows we'll funnel our lies,
I'm sure they'll ignore any weak warning cries.

We'll feed them the fruit of our teachings from hell,
they'll love it so much it will easily sell!
Divorce will sky-rocket, sex crimes will abound,
much innocent blood will be spilled on the ground.

Their homes will be cursed in short order I say,
When these sermons of mine are received every day.
It wont take too long, we'll be able to tell,
that these visions of mine will help populate hell.

Get busy my cohorts, and put this thing out;
we'll see if the church can continue to shout.
The holiness people who stand in our way,
will soon hush their crying against show and play.

We'll have such success so that our greatest weapon,
will be compromised Christians who keep on back steppin'.
They'll argue and lie, they'll excuse and defend,
until those holy preachers will soon have to bend.

“Everybody is doing it”, each one will think,
more and more getting used to their spiritual stink.
Science fiction, then monsters, now aliens too,
by the time they see my face they wont have a clue.

“We'll still go to heaven" will be what they say,
loving darkness and evil until Judgement Day.
Often laughing at evil, even lusting within,
yes they'll all become hypocrites hiding their sin.

They'll really believe that they're getting a treat,
till my AntiChrist comes to take over his seat.
He'll dazzle the world while his viewers behold,
the face of The Beast who from us they were sold.

We'll win through deception, no this plan cannot fail,
though the few who believe will not bow knee to Baal.
Tell them “a little is okay”, and God surely knows,
We will win them all back as their love for God goes. 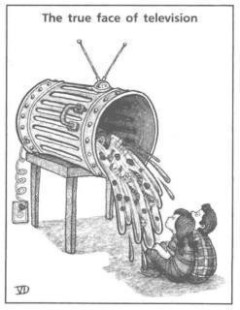 The TV is my shepherd, I shall not want.

It maketh me lie down on green sofas.

It leadeth me away from the true faith.

It destroyeth my soul.

It guides me in the path of sex and violence for the devil's sake.

Yea, though I walk in the shadow of Christ's obedience and holiness,

I will fear no correction.

There will be no cross for me,

for my TV is with me.

It's cable and remote, they comfort me.

It prepareth a commercial for me in the presence of my desires.

It anointest my head with lies and deception.

My lust runneth over.

Surely, laziness and sin shall follow me all the days of my life.

And I shall dwell in the house of idols till I die and am judged for my deeds. 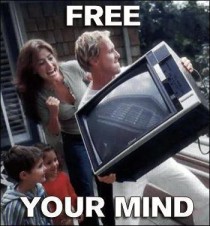 Until someone can repent from his or her watching worldly tv, they are still on the road to destruction. The only other special tree in The Garden was the Tree of Life, that Tree represented Christ Himself, and the pure milk of His word and teachings, and through His apostles, in the Holy Scriptures.

Repent and purify your hearts and minds, pefecting holiness out of reverence for God. 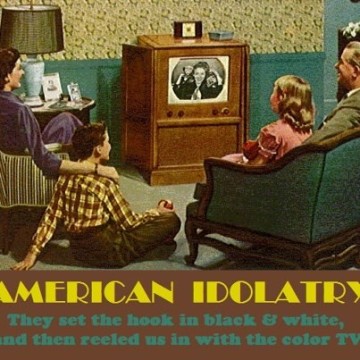 Click here to watch Idol worship by the Skit Guys