"You have not because you ask not" James 4:2 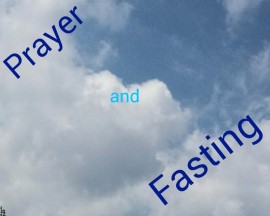 He Will Do Anything but pray

I'm convinced that the modern professing church would like to do anything except pray. And when I say this I'm not just talking about the false, watered-down false gospel preaching social clubs that call themselves churches but in reality are nothing more than institutions built by the cunning craftiness of charismatic men with a gift (not of teaching but) of speaking. I'm talking about many of those who really preach a lot of good doctrine and cross all their theological T's. They will do almost anything except pray! They'll learn Greek and teach Grudem's Systematic Theology. They'll spend hours and hours delving deep into words like "Hypostatic Union" and "Supralapsarianism". The leaders will study for doctorates and spend their time writing theological essays for seminary journals. Yet the very same ones don't seem to have enough time to pray!

How do I know they don't pray? It's obvious. Jesus said that what you do secretly God will reward you for openly (Mat. 6:6). When these preachers and when these men stand up publicly to teach and preach God's Word, if they were praying men there would be a power that would attend the spoken Word. Deep conviction from the Holy Spirit would go forth and seize the hearts of the hearers in holy dread in the cases where sin is present. The winds of regeneration would blow as they proclaimed the Word and some would be truly converted sometimes. The saints of God would be moved and convinced by the Word and it would work in them to produce in them a greater level of sanctification and dedicated to Christ in their lives. They wouldn't have the same powerless preaching continually that is all head and no heart, all intellect and no true fire of real Spirit-birthed passion.

Men can fake and counterfeit a lot of things. But one thing that no one can counterfeit is the anointing of the power of the Holy Spirit. Many try to do so with their hyped up emotional music and tear-jerking appeals to come forward at the altar call. They raise their voice in their sermons at the right times and even force a few tears to drop from their eyes to cause people to be moved in the realm of the sensual and soulish. But the genuine God-given smearing of the power of His Holy Spirit is one thing that all the learning of Alexandria and all the horse power of Egypt can't produce. It's truly a sad thing when theology (even good theology) becomes a substitute for earnestly seeking the face of God is desperate prayer.

We need a lot more men like Epaphras in the midst of the church today."Epaphras, who is one of you, a servant of Christ Jesus, greets you, always struggling on your behalf in his prayers, that you may stand mature and fully assured in all the will of God." (Col. 4:12) The word struggling is "agōnizomai" in Greek. It was used of Olympic competitors who trained vigorously with all their might to press through and gain the prize (cf. 1 Cor. 9:25). This man was a prayer soldier of Jesus Christ. He was intense, passionate, and full of zeal in prayer (v. 13). Yet Paul told the Colossians that he "is one of you". This man was no superhuman. He was one of us. He was buffeted by a fallen flesh that tempted him to think prayer was a drudgery. He might have been tempted to doze off once in a while when rising too early and laying his head on his bedside in prayer. Yet he still pressed on, so much so that he won the commendation of an apostle and was thought worthy by the Holy Spirit to be etched on the pages of Holy Scripture for all eternity. This man agonized in prayer. He pressed on with focus and stamina in faith to pray the burden through and win the prize. And not only did he pray intensely for a few moments before Sunday's sermon. Paul said he "always" struggled and labored in prayer for the saints.

Brethren, if we pray more we will see God move more. We can manage to study less, socialize less, play less, relax less, if we will only pray more. The preacher who breaths the air of the secret place of the most High as a way of life is a man through whom the most High breaths His anointed, piercing Word of truth with power.

...I'm not saying that theology is bad. We must have good, solid and profound theological teaching in our churches. The saints must understand... Christ if they're to have a solid understanding of God's Word. Knowing Greek can be very important for one who has dedicated his life to the exposition of the fine points of Scripture... But...what good does all your learning do if it's not set on fire by the Holy Spirit? Is there even such a thing as fire that produces light but doesn't produce heat? Then how can we claim that the fire of the Holy Spirit is with us producing the light of sound doctrine if there's no heat of zeal and power to warm that truth and make it effective to set men ablaze with love for Christ. God uses humble, broken men. And men are only humbled and broken when they live close to God in prayer.

Don't take this as a condemnation of sincere men in the ministry. Rather, take it to heart as a serious exhortation to obey the first things of the doctrine of Christ and to seek His face in fervent expectation for Him to move in our midst in power.

You must become like a little child to enter the Kingdom (Mat. 18:3). So then, fall down and beg the Father to have mercy on your prayerless soul! The first mark of a child is dependence. Children are humble. They are not self-sufficient. They are totally dependent on the provision of their parents and they know they can't do everything in their own strength. So then, you are totally dependent on your heavenly Father for everything, that is, if you really are a child. Live like it! Return to the prayer closet! Your every blessing, your every step, your every plan, everything is all dependent on the Father. Without Him, you can do nothing. 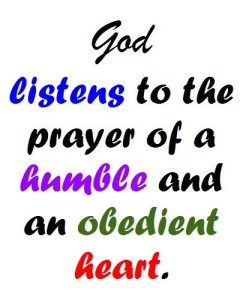