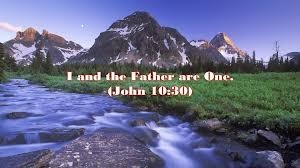 Jesus said, "I and my Father are one' but the Jews misunderstood him, thinking he was claiming to be equal with God. (vs. 33). Trinitarians make the same mistake. The oneness referred to, is not a declaration by Christ that he is "Very God", but rather unity of purpose.

Jesus subsequently prayed for his disciples, "that they may be one, as we are." (John 17:11, 21). These words require that the unity referred to, be also extended to the disciples. Obviously the unity is not that of the powers of the Godhead but unity resulting from sanctification through the word of God. (John 17:14, 17, 18). See also John 17:22, 23: ". . . that they may be one, even as we are one: I in them, and thou in me, that they may be made perfect in one . . ." Likewise, these words require a relationship between the disciples and Christ which exists between the Son and his Father - a unity, or perfection with the divine purpose.

Elsewhere in John's gospel, Jesus clearly affirms that he is not co-equal with the Father: "The Son can do nothing of himself, but what he seeth the Father do." (John 5:19); "I can of mine own self do nothing: as I hear, I judge: and my judgment is just; because I seek not mine own will, but the will of the Father which hath sent me." (John 5:30); "My Father is greater than I." (John 14:28).

John Calvin, the Swiss Protestant reformer, made the following observation regarding John 10:30: "The ancients greatly perverted this passage, when they would prove from it, that Christ is of identically the same nature (or consubstantial) with the Father. For Christ speaks not concerning an unity of substance; but of the mutual agreement between the Father and himself; to wit, affirming, that, whatsoever he does, would be sanctioned by the power of the Father."