Pages in this section:

1. Diabetes can be cured: probiotics

5. Curing diabetes:refining the diet and lifestyle

A higher intake of omega-3 fatty acids (AS IN KRILL OIL-TH) can help reduce insulin resistance, thereby reducing the risk or severity of type 2 diabetes, according to a study conducted by researchers from the University of South Australia and published in the journal Public Health Nutrition. Type 2 diabetes develops when the body becomes desensitized to the blood sugar-regulating hormone insulin, leading to dangerously high levels of glucose in the blood. It is strongly associated with a diet high in sugars and fats, and is strongly linked to obesity and cardiovascular disease.

A growing body of research

The study was conducted on 126 adult First Nations Canadians living in the rural Okanagan region of British Columbia. A First Nations population was used due to the relatively high risk of type 2 diabetes among such groups. The researchers found that participants who ate more omega-3s in their diets showed significantly lower levels of insulin resistance, while those with a higher dietary saturated fat intake showed higher insulin resistance (and therefore were at higher risk of diabetes). An earlier study, conducted by researchers from the University of Barcelona and published in the Federation of American Societies for Experimental Biology Journal in 2009, found that a higher dietary intake of omega-3s was associated with lower levels of biochemical markers of insulin resistance. A study published in the European Journal of Lipid Science and Technology in 2011 found a similar result among participants who ingested one gram of either a placebo or concentrated omega-3 fatty acids (EPA and DHA) three times a day with meals over the course of six months.

Essential oils for your health

Many researchers now believe that the Western diet is too high in omega-6 fatty acids, derived primarily from vegetable oils, and too low in omega-3 fatty acids, which can be found in fish oil, canola oil, flax seeds, chia seeds, kiwifruit and purslane. According to the Mayo Clinic, rigorous scientific research strongly supports numerous health benefits of increased intake of omega-3s or fish oil. Studies have shown that people who take omega-3 supplements live significantly longer and have significantly fewer heart attacks. Taking just one or two omega-3 capsules per day has also been shown to significantly reduce systemic inflammation, which can increase the risk of chronic diseases such as heart disease, diabetes, cancer and dementia.

Omega-3s have also been shown to lower blood pressure and to decrease pain and inflammation in people with rheumatoid arthritis - sometimes as well as over-the-counter drugs! In addition, the Mayo Clinic lists at least 70 other potential health benefits that have been supported by scientific research, but have yet to be conclusively proven to the clinic's satisfaction. The new study into these oils' benefits in regulating blood sugar and preventing diabetes are just one more step toward confirming these benefits.

The incidence of diabetes in the United States has been rising for years, making it the seventh leading cause of death in the country, according to the National Institutes of Health, but promising new research indicates that fish oil can help prevent its occurrence. The study, published recently in the Journal of Clinical Endocrinology & Metabolism, indicates that regular consumption of fish oil supplements works to reduce type 2 diabetes risk because it raises the level of adiponectin, a hormone in the human bloodstream. The increase in the level of adiponectin also works to reduce the risk of heart disease in people who consume fish-oil or omega-3 fatty acid supplements. The hormone has also been linked to the metabolism of glucose and can help control inflammation - a major factor in obesity (which, in turn, is linked to increased risk of diabetes).

Jason Wu, PhD, of Harvard University's School of Public Health and the primary author of the study, said that in previous studies involving animals researchers discovered that fish oil helped boost circulation of adiponectin, adding that it was not known whether fish oil had a similar hormone-boosting effect in humans until now. Wu also said 14 recent clinical trials provided the evidence that fish oil supplementation worked to increase adiponectin levels, thereby decreasing the incident of type 2 diabetes. The study involved 682 people who were provided fish oil supplements and another 642 who were given placebos. The results showed that those receiving the supplementation had an increase in the level of adiponectin by 0.37ug/mL over those who had been given a placebo.

Despite the results, it remains unclear as to whether fish oil can influence the metabolism of glucose as it pertains to the development of type 2 diabetes. But the results nonetheless support earlier studies indicating that fish oil supplementation helps control glucose levels and aids in the metabolism of fat cells that may occur due to fish oil consumption.

Wu's results mirror those of two earlier studies, whose results were published in 2011. Per Reuters: In one study, of more than 3,000 older U.S. adults, researchers found that those with the highest blood levels of eicosapentaenoic acid (EPA) and docosahexaenoic acid (DHA) - two omega-3s found in fatty fish - were about one-third less likely to develop diabetes over the next decade than their counterparts with the lowest levels.

In the other, researchers found that among 43,000 Singapore adults, those who got the most alpha-linolenic acid (ALA) in their diets had a decreased diabetes risk. ALA is an omega-3 fat found in certain plant foods, including flaxseed, canola oil and soy.

In those studies it also was not clear that fish-oil or omega-3 supplements actually worked to reduce type-2 diabetes, but in those and subsequent studies, there is at least anecdotal evidence to support such a theory.

Andrew Odegaard of the University of Minnesota in Minneapolis, one of the researchers on the Singapore study, said there is no "magic bullet" in the fight against diabetes or other diseases, but there are certainly scientifically proven ways in which to reduce your risk. Consumption of healthy "whole foods" like fruits, vegetables, veggie oils and fish all work to mitigate disease, and that includes diabetes. "Approaching your dietary intake with this 'big picture' approach should take care of the small things, like essential nutrients such as omega-3 fatty acids," Odegaard told Reuters Health.

The 2011 U.S. study examined an aspect of the fish oil-type 2 diabetes link that had not previously been looked at: Examining people's actual omega-3 fatty acid blood levels and their later risk of contracting diabetes. "That type of study generally offers stronger evidence than those which ask people about their eating habits," Reuters reported.

Sources for this article include: 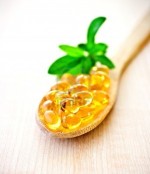 New and undiagnosed cases of diabetes continue to rise at epidemic rates, with as many as one in three men, women and children projected to be affected by the metabolic disorder by 2025. The high circulating blood sugar levels associated with diabetes significantly raise the risk of developing a host of chronic illnesses including cardiovascular disease, stroke, cancer and dementia. Fortunately, you can protect yourself by including any of a number of naturally occurring nutrients while eliminating excess sugar and refined carbohydrates from your diet. Diabetes develops and progresses as a result of decreased cellular sensitivity to the effects of insulin, as the hormone slowly becomes less effective in its ability to usher sugar out of the bloodstream for use as energy. Over the past decade, researchers have identified a handful of natural compounds that are demonstrated to increase the sensitivity of insulin and lower the risk developing diabetes and related diabetic complications.

A research study team from the Harvard School of Public Health has published the findings of a meta-analysis in the Journal of Clinical Endocrinology & Metabolism that explains how widely-used fish oil supplements modestly increase amounts of a hormone that is associated with lower risk of diabetes and heart disease. The scientists determined that omega-3 long-chain fats raise levels of adiponectin in the bloodstream. Adiponectin is an important hormone that assists metabolic processes like glucose regulation and the modulation of inflammation in the body.

To conduct this study, researchers developed a meta-analysis including 14 randomized, placebo-controlled studies that analyzed the consumption of fish oil of an omega-6 fat substitute (placebo). Six hundred and eighty-two participants were treated with fish oil and 641 were given placebos, consisting of olive and sunflower oils. Individuals taking fish oil increased their adiponectin levels by a statistically significant 0.37 ug/mL. This is the first study to analyze data from prior trials to determine that fish oil consumption increases adiponectin in humans, consequently lowering the risk of developing diabetes.

The lead study author, Dr. Jason Lu concluded "results from our study suggest that higher intake of fish oil may moderately increase blood level of adiponectin, and these results support potential benefits of fish  oil consumption on glucose control and fat cell metabolism." Many past studies have shown that fish oil supplementation can significantly lower the risk associated with cardiovascular disease and sudden death from a heart attack. This meta-analysis demonstrates that taking a standardized, distilled fish oil supplement (1,200 to 2,400 EPA/DHA daily) can help thwart development of diabetes and related complications.

A team of researchers led by JoAnn F. Manson of the Harvard School of Public Health revealed that consumption of walnut oil is significantly correlated to lower risk of type 2 diabetes in women. The disclosure was made in February of this year with the release of print issue number 4 from volume 143 of the Journal of Nutrition. Prior medical evidence associating polyunsaturated fatty acid content in walnut oil with lower risk of cardio-metabolic conditions served as the springboard for the research. The other members of the collaborative endeavor are An Pan, Qi Sun, Frank Hu, and Walter Willett, who hail from private and public medical and academic institutions in Boston and Singapore.

The research involved two decades of a large sample cohort of almost 60,000 women who belong to two age brackets, 62-57 and 35-52 years old, from the Nurses Health Study I and II, respectively. Findings showed that eating walnuts is inversely associated with the risk of having type 2 diabetes and the reduced risk is mediated by body mass index. With several other studies, the research by Manson et al provided a scaffold to the hypothesis that incorporating nuts as a component of a healthy balanced diet helps prevent diabetes.

Walnut oil is high in triglycerides, the heart-friendly omega-3 fatty acids. Among these triglycerides are polyunsaturated fats such as a-linolenic acid, linoleic acid, and the monounsaturated fat, oleic acid. It is also rich in bioactive gamma-tocopherol which is a nutritionally superior form of vitamin E. Another bioactive component is phytosterol.

Other Health Benefits from Walnut Oil

Aside from its high potential in reducing the risk factor for type 2 diabetes, there are other documented health benefits of walnut oil which include: