And God said, “Behold, I have given you every plant yielding seed that is on the face of all the earth, and every tree with seed in its fruit. You shall have them for food."

And on the banks, on both sides of the river, there will grow all kinds of trees for food. Their leaves will not wither, nor their fruit fail, but they will bear fresh fruit every month, because the water for them flows from the sanctuary. Their fruit will be for food, and their leaves for healing.”

Sage, scientifically known as Salvia officinalis, comes from the latin word salvere which basically means to be saved. During the 10th century, Arab physicians thought sage promoted immortality, while in the 14th century, Europeans would use it to protect themselves from witchcraft. Although these old beliefs may seem like pure fantasy to most, it's not surprising that sage was actually named herb of the year by the International Herb Association back in 2001. Sage comes from countries surrounding the Mediterranean Sea and has been utilized for thousands of years. This great medicinal herb is from the mint (Labiatae) family and, just like rosemary, it contains a variety of volatile oils, flavonoids and phenolic acids.

This well regarded medicinal herb definitely has incredible health benefits if only taking into account its strong anti-oxidant and anti-inflammatory properties, although the most interesting aspect about this wonderful herb seems to be the research that has led specialists to believe it could be a major player in preserving or optimizing brain functions. Some of the other specific properties that are well recognized and associated to the use of sage include reducing excessive perspiration and lowering blood sugar levels in diabetics.

Do you know someone afflicted by memory loss or Alzheimer's disease ? If so, have you ever considered sage to help their condition ?

In June 2003, the journal, Pharmacology Biochemistry and Behavior, published some quite revealing results from research done with sage. A study was conducted in order to verify sage's true potential as a memory enhancer. The scientists had 45 adults on hand for two separate trials. Some of the individuals were given a placebo while others had essential oil extracts made of sage, with doses varying between 50 to 150 microls. Memory tests were performed by the participants, 1 to 6 hours following the intakes. In each trial, even the smallest amounts of sage were enough for participants to notably improve their memory.

During the September 2003 British Pharmaceutical Conference in Harrogate, Professor Peter Houghton presented compelling information about research that showed how salvia miltiorrhiza or Chinese sage could possibly help treat Alzheimer's disease, or at the very least, be an interesting alternative to the usual pharmaceutical drugs. Dr. Houghton elaborated on how sage's active compounds, similar to those employed in prescribed drugs, were capable of somewhat neutralizing Alzheimer's disease.

In the experiment, scientists discovered that certain isolated compounds from a sage extract were found to be acetylcholinesterase (AchE) inhibitors. Generally, Alzheimer's disease displays an increase of AchE that leads to loss of memory by depleting the cholinergic and noncholinergic neurons of the brain. By stopping any increase in AchE, sage provides a serious therapeutic option instead of the conventional pharmaceutical AchE inhibitors.

.....In other hopeful news about Alzheimer's, the German Institute for Quality and Efficiency in Health Care (IQWiG) is currently studying herbal preparations made from the leaves of the Ginkgo biloba tree. In preliminary reports, IQWiG scientists have found the natural treatments appear to improve symptoms of the disease, including the ability of some AD patients to regain the ability to perform daily tasks. 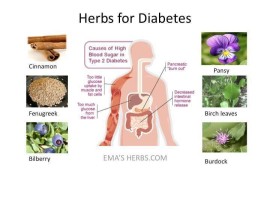 If you or someone you know suffers from either diabetes or pre-diabetes, it might come as a surprise to learn that a life of endless insulin shots and blood glucose drugs is not your only treatment option. If you are serious about truly overcoming your diabetic condition, there are actually a number of all-natural herbal remedies available that possess proven curative benefits.

Here are some of your best options:

1) Ginseng. Known for its ability to help modulate blood sugar levels, ginseng, and American ginseng in particular, is a powerful weapon in the fight against diabetes. A 2000 study out of the University of Toronto, for instance, found that a single three-gram dose of ginseng extract helps significantly reduce the blood sugar spike that typically occurs following a high-carbohydrate meal. Specifically for diabetics, taking ginseng either with or before a meal can help produce such results quickly and safely.

A follow-up study conducted in 2001 found that doses of ginseng even as low as one gram were still enough to provide virtually the same therapeutic benefits. Based on the results of the two studies, researchers recommended that diabetic patients take a minimum one-gram dose of ginseng 40 minutes prior to mealtime to normalize their blood sugar levels naturally. When combined with a healthy, low-carbohydrate and low-sugar diet, ginseng can even help some diabetics fully recover from their condition.

2) Holy basil leaf. Also known as tulsi,holy basil leaf has long been used throughout South Asia as a folk medicine. Today, it has been shown to be a powerful regulator of both blood sugar and blood lipid levels, and ultimately as an effective treatment for diabetes. According to a placebo-controlled study published in the Journal of Clinical Pharmacy and Therapeutics, holy basil leaf taken in moderate amounts can bring about a roughly 20 percent decrease in blood sugar levels.

According to Mother Earth Living, the traditional way to administer holy basil is in the form of steeped tea. If you have a tea ball or your own teabags, simply add one teaspoon of the dried leaves to one cup of water, and drink three cups of the brew daily. You can also purchase holy basil leaf in capsule or gelcap form as a dietary supplement if this is more convenient.

3) Cinnamon. Cinnamon is a much more medicinal spice than most people probably think it is, particularly as a treatment for erratic blood pressure levels and diabetes. Like ginseng, cinnamon helps to modulate blood sugar levels throughout the day, particularly in between meals when blood sugar levels tend to spike and drop, which is common for diabetics. As it turns out, cinnamon taken in therapeutic doses helps to lower fasting blood glucose levels and boost insulin response, effectively correcting the very symptoms associated with diabetes.

"Not only does cinnamon activate essential enzymes in the body, thus stimulating the receptors in the cells so they will respond more efficiently to insulin, but it also inhibits the enzymes responsible for deactivating ... causing insulin resistance," explains David W. Tanton in the book Antidepressants, Antipsychotics, and Stimulants: Dangerous Drugs on Trial.

4) Bitter melon. Another traditional folk remedy, bitter melon, or Momordica charantia, has long been utilized by ancient cultures as a treatment for diabetes and blood sugar level issues. The cucumber-like fruit contains several powerful compounds that exhibit anti-diabetic activities, including charantin, a hypoglycemic agent that has actually been shown to be more effective, and far safer, than the diabetes drug tolbutamide (Tol-Tab). "Momordica also contains an insulin-like polypeptide, polypeptide-P, which lowers blood sugar levels when injected subcutaneously into type 1 diabetic patients," explains the site Holistic Online about bitter melon. "The oral administration of 50-60 ml (milliliters) of the juice has shown good results in clinical trials."

Both intravenously and orally, onion extract has been shown scientifically not only to improve the metabolism of carbohydrates in the liver, but also to correct the improper release and use of insulin in the liver and elsewhere throughout the body. Similarly, garlic, which is also a member of the onion family, helps to normalize blood pressure and cholesterol levels, and reduce blood glucose levels without causing harmful side effects.

Sources for this article include: